Home » What is Fly Fishing? 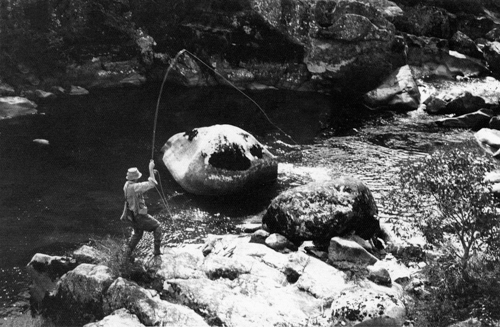 There are indications that European fly fishing may be 2000 years old, but the first definite reference was by Claudius Aelianus in 200 A.D. He described how in parts of Macedonia, anglers caught ‘speckled fish’ (trout) by wrapping feathers and thread around a small hook to imitate a flying insect.

References to sea anglers fishing with colourful feathers bound to a hook to represent a baitfish are equally ancient.

For many centuries, artificial imitations of natural flies continued to be fished using very long wooden rods, with a short line twisted from horsetail hair and tied to the rod tip. In Japan, the same technique began independently at least 430 years ago, involving much lighter rods of bamboo.

European anglers did not begin to use reels until the 18th century. The 19th century brought heavy tapered lines plaited from silk—linked to the fly by a short length of silkworm gut—and relatively light flexible rods tapered from split segments of cane. This allowed the fly to be thrown a much greater distance.
Advances in fly construction also brought an explosion of interest in fishing the ‘dry’ (floating) fly, as opposed to fishing a ‘wet’ (sunken) fly. Some anglers also began to use heavier fly fishing tackle to catch various saltwater species on large wet flies mainly imitating small fish.

The 20th century delivered rods of hollow fibreglass and hollow carbon fibre, synthetic floating and sinking lines, and ‘leaders’ (the last link to the fly) of fine clear nylon. As a result of these gradual innovations, fly fishing evolved as a mechanically distinctive form of angling. Instead of the weight being in the bait or lure or float or sinker, the relatively weightless fly is driven by the weight of the line and the back and forth rhythm of the rod.

Today, fly fishing is practised in both fresh and salt water to catch a very wide range of fish. However, many anglers still rate the sport’s most distinctive thrill as the moment when a trout rises to take their fly from the surface.