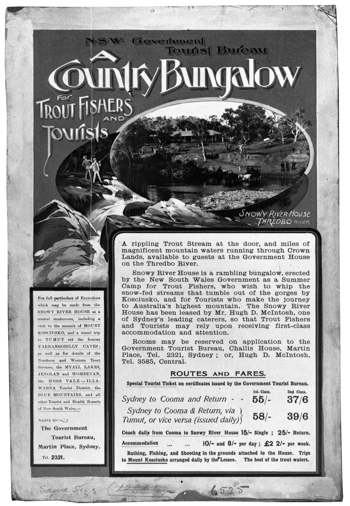 In the boom years of the early 20th century, fly fishers from Sydney and Melbourne began to make the long journey to the mountains. In wild rivers such as the Snowy and Geehi, sometimes accessible only by packhorse, they pursued large rainbow trout in remote bush settings. Men from the city professions treasured the solitude and clean air of the high country where, in the words of Qantas founder Sir Hudson Fysh, ‘we breathe the wind as the mountains’ gift.’

To the east, the fertile slower streams of the Monaro tableland also provided world class fly fishing.
The NSW Government, quick to see the tourist potential, established an accommodation house on the Thredbo River near its junction with the Snowy. Later named The Creel, it became a renowned summer base for city fly fishers. In ‘The Seven Rivers’ (1966), Douglas Stewart recalled:

It was haunted by the shades of mighty fishermen of the past, who rode in with pack-horses and camped by far pools of the Snowy when fishing was really fishing; and it was patrolled still by a few survivors of the heroic days and by their direct heirs and descendants, tall, silent, formidable men who trod the veranda in big boots and disappeared early in the morning.

From 1949 to 1974 the giant Snowy Mountains Scheme brought huge changes. Favourite stretches of rivers were dammed, once isolated streams became easily accessible, and the legendary Creel was submerged by the new Lake Jindabyne. Some of the 16 major new dams, notably Lake Eucumbene with its 250 km shoreline, provided anglers with many new opportunities and led to innovations in tackle and techniques. However, the once mighty Snowy River was reduced to one per cent of its natural flow below Lake Jindabyne.